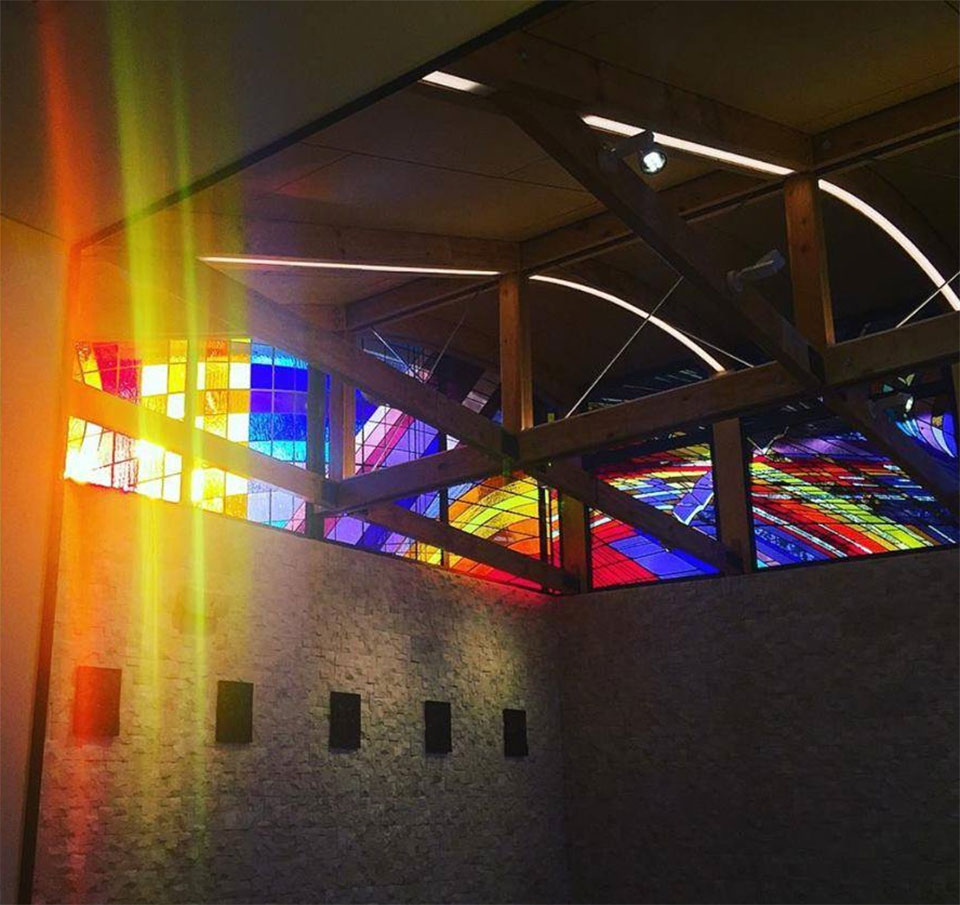 Reflecting on the manner in which we procure architectural projects and the associated finished product reveals a dichotomy between the abstract and the practical. That is, the conceptual thought that through development becomes the built reality. In many respects this process, and more particularly the basis of first principle design theory, reminds me of a conversation with a theologian regarding the Catholic sacraments, principally, the telos of the sacrament. Through this conversation this notion of telos initiated a line of enquiry: does our design practice and architecture, for myself specifically of Catholic sacred space, accurately reflect the high ideals revealed in Aristotelian philosophy as understood by Thomas Aquinas for the Catholic Church?

Telos, from the Greek τέλος, is the principal purpose or the reason something is. This concept is directly related to teleology and is fundamental to Platonic and Aristotelian philosophy. Teleology, the explanation of experience by the purpose it serves, principally holds that nature inherently holds toward definite ends. Hence, in teleological terms, a thing, process or action exists for, and has, a logical purpose. The example I was given is: the telos of a cup is to hold liquid. There is no other primary reason a cup exists other than to hold liquid. Thus, the value of the cup, or indeed whether the cup is actually a cup can be measured by how well it achieves this end: a cup that falls over when filled with water is not an ideal cup or potentially not even a cup at all. When this is applied to architecture, or more specifically architectural practice, an essential question arises: do we, as architectural practitioners examine what it is that we are designing? And, what is the principal purpose of this building in this context? This, ideally, is the manner in which all design commences however, in reality, uniformed decisions can be made at this initial stage which then have considerable implications on the remainder of the design process.

The question of the base principal design process is most appropriate for niche building typologies that retain an important emotional investment from the community and are, as it were, representative of something. For example, in the ecclesial sector, this question is further clarified in the theological definition of telos as the doctrine of design and purpose in the material world. This gives further weight to the notion that the design of these spaces should be directly related to their ultimate purpose. The Catechism of the Catholic Church states that the church building is not simply a place of gathering but rather a symbol of the relationship between God and the people of God. Thus the primary end of a Catholic sacred space is to facilitate a relationship between God and the people of God: the collective individuals of the worshipping community. Any deviation from this ideal is not fulfilling the purpose of the building and can not be an authentic expression of the faith community to which it serves.

There are many distinct ways that this notion is communicated through artistry, building form, and the form of prayer. Rev Dr Stephen Hackett MSC, proposes that it is the liturgy, in particular the liturgical ordering of a church, that should transcend other aspects of church design, that is, namely, style, shape, structure, cultural, environmental and geographical characteristics. However, the outcomes of this ideal, that liturgy be the critical element in the design of churches, are not a foregone conclusion as each project is dependant on the proficiency of the professionals involved. Liturgy itself, whilst the essential elements remain consistent, is constantly evolving. Thus liturgical ordering will continue to develop in response to this. It for this reason that the telos be correctly understood by the individuals involved and addressed effectively in each project from inception stage. At a fundamental level, if the telos is not correctly understood and responded to the resulting design process and built outcome is not an appropriate response to the design brief. Comparing it again with the cup example outlined above it may be said that a building, in this case a church building, that does not achieve or augment the principle end of the building should not be called a church at all or, at the least, a church appropriate for the contemporary community of believers.

What then does this reveal about our current design practice? Largely it is a warning sign that we stop learning and engaging with current practice at our peril. It matters little what market sector we work in: it is imperative that we, as architectural practitioners, continually engage in a meaningful way with our clients and their buildings. Albert Einstein famously said that once you stop learning you start dying. Whilst this is often seen as a motivator for self improvement it can also be applied to the practice of architecture: once you think you have mastered the process and stop the search for knowledge your practice will likely falter and stagnate. And really, who wants that?