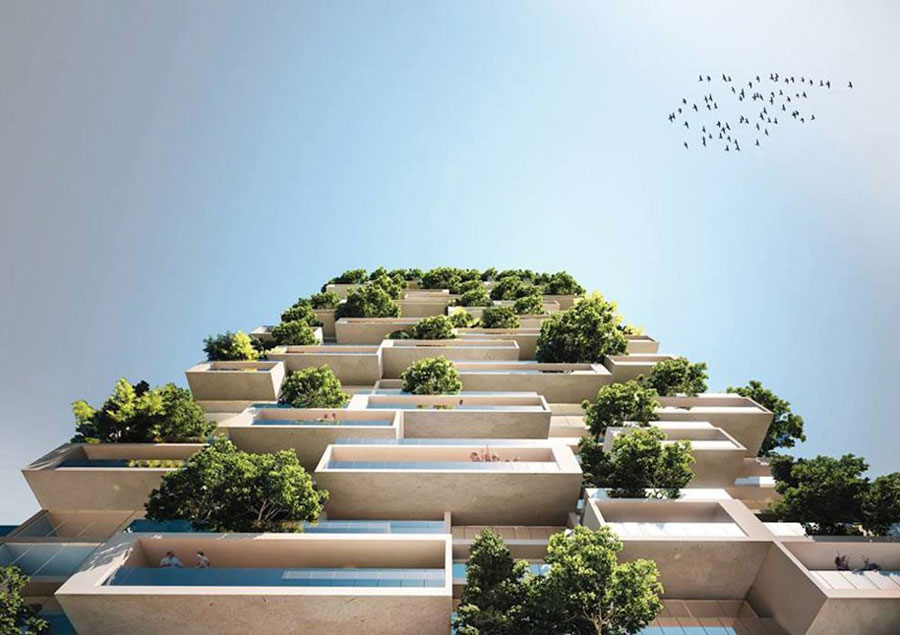 Australia’s population is growing. 66% Australians live in capital cities now. Sydney’s population has been forecast to grow by 45% between 2011 and 2030. With strategies aimed at the increase of population density, by then approximately 80% of residents will be living in apartments making high-rise apartments the fastest growing building segment in Australia.

We face the challenge of sustainably housing this growth!

Australia has committed to substantially reduce carbon emissions until mid of this century and needs to move quickly to adjust its industries. Being one of the major growth elements, the Design and Construction of High-Rise Residential Apartment Buildings will place additional pressure on emissions and is quickly becoming a key focus point for implication of the internationally set commitments to Carbon Neutrality.

The Design Philosophy ‘Net Zero’ is leading the way forward by first and foremost perfecting the thermal envelope or shell of the building, aiming for minimal energy usage. This is achieved through passive design considerations of building form and orientation, façade opening ratios, shading, façade performances, thermal mass and insulation. Also known as ‘fabric first’, the approach refers to the desirability of optimal basic building orientation and shell design from an energy efficiency perspective. Any remaining energy needs of the building are then generated on site from more active elements such as the regeneration of energy from renewable resources. Further opportunities lie in better metering of energy usage & better control over building systems & occupant engagement.

Building economy considerations based on research visualized in Faithful & Gould’s ‘Carbon Cost Hierarchy Pyramid’ indicates that, as a rule, active elements generally have higher costs while delivering less savings than passive elements. This is in reference to active initiatives such as photo voltaic cells, wind turbines & tri-generation, which combines on-site energy generation for power supply as well as heating and cooling system support from the combustion process. Hence these are sometimes disparagingly referred to as ‘eco-bling’.

Studies have also shown that a ‘Net Zero’ building has a higher percentage of economic benefits as compared to a building of current Australian and even Global Excellence due to the fact the that the excellent thermal envelope of a ‘Net Zero’ building can render entire building systems redundant. For example, a well-tuned, low energy usage air-conditioning system of a globally excellent building has a higher cost than no air conditioning system at all.

This may yet change with consumer education in progress, however an overall ‘green premium’ for an entire suite of initiatives of high as well as low marketability may be realised when adding up to a certification, such as Net-Zero Energy. In fact, it is already common practice to combine a Net Zero Energy rating with an additional more holistic rating such as Greenstar for ultimate environmental and communal benefit.

‘Net Zero by Design’ can be achieved for a certified rating or simply for the implication of suitable measures to the long term benefit of the user. Highest priority is an integrated approach with close cooperation between client, project management, architect, engineers and suppliers, starting from day one of project conception through to building handover and on to post-construction evaluation, building fine-tuning, management and user education.

Our opportunities lie in a number of different pathways. Among them are the traditional style developments with leading focus on translating energy benefits all the way through to the user with prototype schemes such as ‘The house with no bills’.  Further emerging are communally owned co-housing projects, cutting costs by simplifying the process, financial procurement arrangements and focusing on shared arrangements for benefit of reducing the environmental impact, affordability and communal engagement.